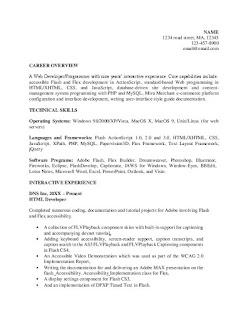 Download the best HTML Developer Resume Sample in word format in a simple way. Having experience in different software and languages like HTML/XHTML, Adobe Flash etc, showcase all your skills and knowledge in your HTML CV in perfect format to attract the attention of recruiters. You can also find different formats  and templates for free in our website based on your interest.

A collection of FLVPlayback component skins with built-in support for captioning and accompanying devnet tutorial,
Adding keyboard accessibility, screen-reader support, caption transcripts, and caption search to the AS3 FLVPlayback and FLVPlayback Captioning components in Flash CS4,
An Accessible Video Demonstration which was used as part of the WCAG 2.0 Implementation Report,
Writing the documentation for and delivering an Adobe MAX presentation on the flash. Accessibility. Accessibility Implementation class for Flex,
A display settings component for Flash CS3,
And an implementation of DFXP Timed Text in Flash.


Developed, programmed, and helped manage a team of developers to produce and maintain interactive work for clients including Palm, Cadillac, Hummer, Hearts on Fire, Stop Handgun Violence, TIAA-CREF, and (PRODUCT) RED.
Significant projects I worked on include the 2010 Cadillac SRX micro site, the Hearts On Fire Architectural Collection micro site and HeartsOnFire.com, the Palm Prē advertising landing page, the (RED)NIGHTS micro site, and Modernista.com.
Developed and programmed a framework in ActionScript 2.0 to support localized international versions of Hummer.com. Managed a team of developers to build out content sections based on the framework.
Developed dynamic user interfaces in Flash that scaled to accommodate localized text in twenty-seven languages. Oversaw the delivery of the content files in XML to the translators, and the deployment of translated content files on the site.
Programmed vehicle configuration tool with support for multiple languages and localized pricing.


Developed and programmed interactive games, product demonstrations, and Web sites in Flash and XHTML for the School Division’s Instructional Technology department.
Worked with a team of interactive content producers to develop fun and educational games for the School Division’s Eduplace.com Web site. Programmed game engines that are capable of being repurposed throughout the site with different user interfaces and content.
Significant projects I developed include Word Builder, Word Sort, Crossword Challenge, Word Find, eWord Game, eGlossary, and Discover! Simulations.
Several of these games are featured at Adobe.com’s Accessibility Resource Center as examples of accessible Flash.
Presented on accessible Flash development at the 2005 South by Southwest Interactive Festival and at the CSUN 20th Annual International Conference "Technology and Persons with Disabilities.
Programmed and helped design product demonstrations in Flash of Houghton Mifflin’s Technology products and Houghton Mifflin’s Reading program for distribution on CD-ROM and via the Web.
Made extensive use of object-oriented programming methods in Flash to provide maximum flexibility during the design cycle and to allow other team members to populate slideshow templates with content without having to edit code.
Advised on best practices for accessible Web page development using XHTML, JavaScript and CSS.


Was active in the Boston music scene for over a decade as a guitarist and performer. My band, The Gravy, released two albums and an EP on Q Division Records and received favorable reviews in Rolling Stone and Musician Magazine. 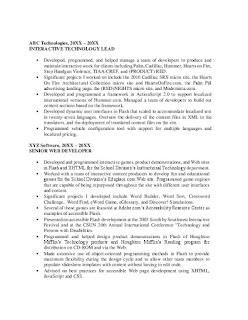 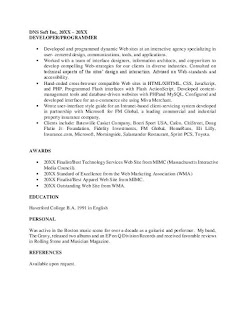 If you would like above Best HTML Resume or HTML CV, please Comment and share so that it gives us positive energy to upload more Resumes and CV...!

Search for resumes and projects

Send A Query & Get A Quote